What is this place called Zushi?
Where is Zushi?
How do I get to Zushi?
Useful bits

What is this place called Zushi? 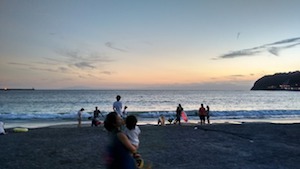 The town of Zushi (逗子) is one of the most famous and popular summer day trips from Tokyo, due to its pleasant beach, Zushi Kaigan.

The beach became famous a few years back for all the wrong reasons. Being near some of the US military bases it attracts a diverse crowd, including a lot of gaijin - whose partying, drinking beaching, presence caused some complaints to the powers that be.

As a result the beach is now known for its air tight restrictions on visitors during the summer months when it ‘opens’. Tattoos, alcohol from outside, and music sound systems are all banned. Quite a transformation for a place known a few short years ago as a place for all night MTV beach parties. The good news is these rules only apply in the summertime … as of course, who’d be crazy enough to go to the beach in June?

The beach bars in summer are pretty good (seeing as you can’t bring your own this is a plus), and the sunsets are a nice experience, if you don’t mind sharing them with swarms of people. with Fuji views across the horizon on clear days, the little jungly cliffs surrounding add a nice tropical feel.

The waves are subtle and the sea is usually calm but it gets a lot of breeze, meaning Zushi Marina, a little south of the main beach, is always busy, and the swimming bay is popular with paddle boarders and windsurfers. Watch out! 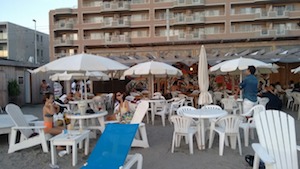 Zushi lies right at the northwestern corner of the Miura Peninsula, and it’s sandwiched right in-between fellow coastal beach towns: Yokosuka to the east, Kamakura to the west, and Hayama to the south.

With such stiff competition nearby it could be tempting to keep on going to Hayama for nicer beaches and a bit more peace. But the town sticks out for its fine showa character, friendly locals and those pretty, golden, volcanic rocky cliffs.

Likewise in the summer months, if ‘dem rules put you off a bit, neighbouring Kamakura has a bandstand and all sorts. Further still west, along the Shonan Coast, Enoshima is even more liberal still, with no restrictions on tattoos or BYOB thus far.

How do I get to Zushi? 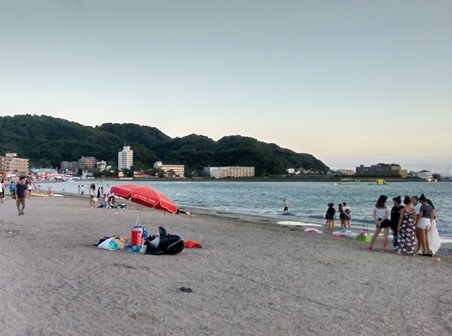 It’s easy to get to the town of Zushi from Tokyo or Yokohama and should take around an hour from Shinjuku. There are two stations in the town, JR Zushi Station (逗子駅) - which is served by both the Yokosuka Line and the mighty Shonan Shinjuku Line - and Shin-Zushi Station which is a little fraction nearer to the beach but less well connected to Tokyo. From Shinjuku the journey should cost between 840-920 JPY.

From Zushi Station there’s a nice walk down the Showa high street, Zushi Ginza (逗子銀座通り)which has some nice shops and cafes, so don’t worry about the walk (it’s about 1km).

In the late spring there’s a famous film festival on the beach which is also recommended. Why not combine some culture with a swim?

Out of season (anytime between early September to early July) the beach is much quieter, and freer.

How would you rate Zushi as a swimming spot? 3 (1 votes)