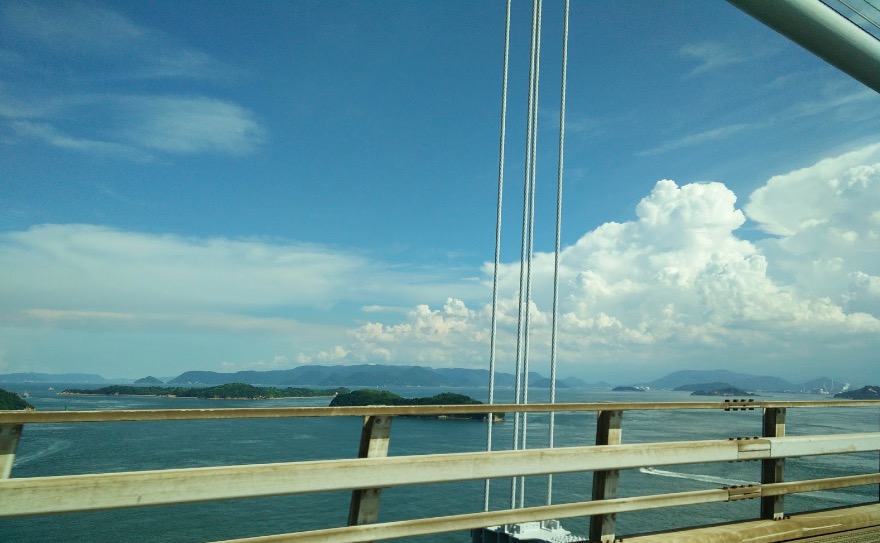 The island of Shikoku (四国) sits comfortably between the Kansai Megapolis, Hiroshima and Kyushu, and yet has avoided the development of those places. Perhaps this is because it was only connected to the main island of Honshu with the opening of The Great Seto Bridge (瀬戸大橋) in 1988.   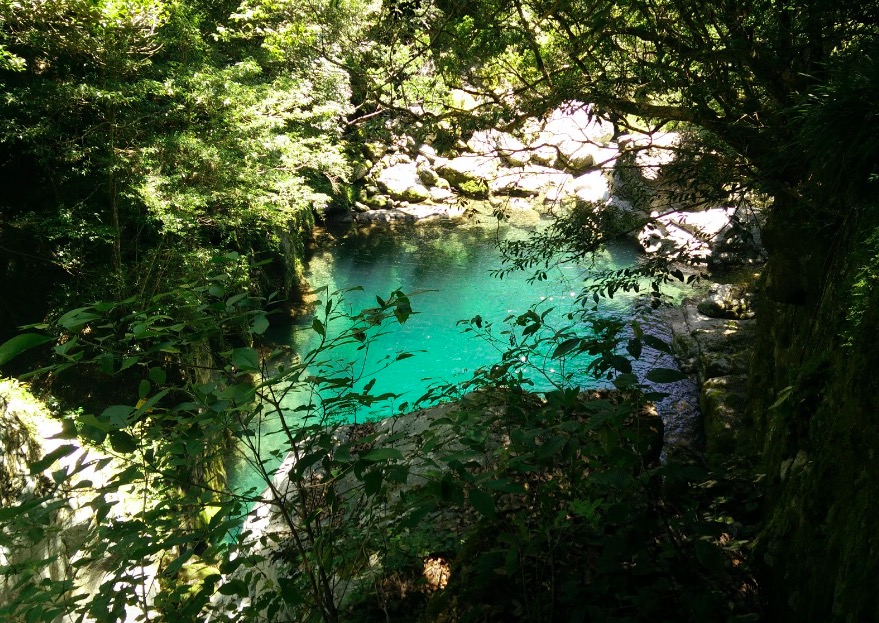 Perhaps that’s the reason why some of the most beautiful places in Japan can be found on Shikoku, unspoiled by commercialisation, and enjoying a slow and natural pace. It’s an island of beautifully clean rivers and excellent coastlines with top class onsen and udon to finish your day with.

In a place with as much to give as Shikoku it would be unfair to compile any kind of league table or Top Ten swim spots, but any such list would surely include today’s location, Nikobuchi Waterfall (にこ淵).

It’s hard to contain our excitement in sharing this place.   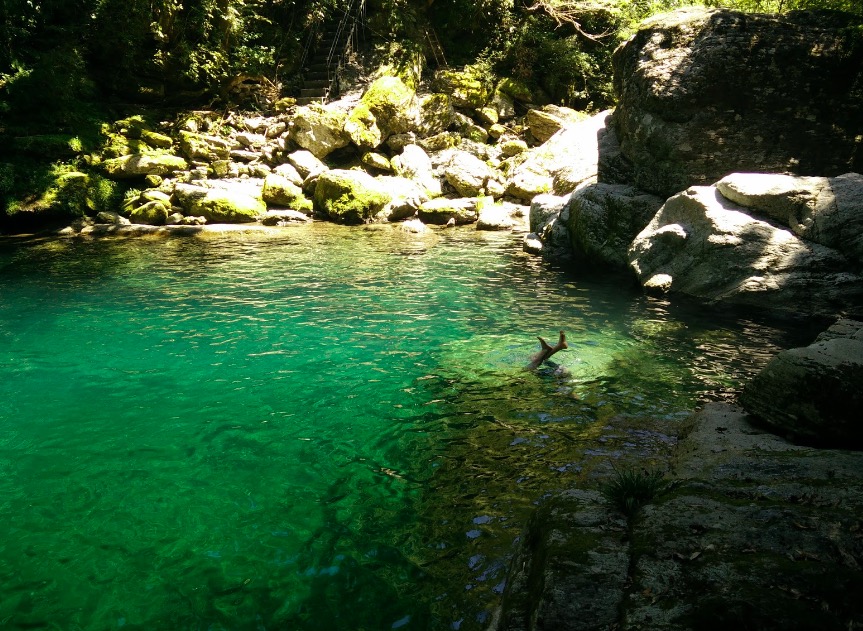 For many years Nikobuchi was almost completely unknown outside of its locality, and though it’s finding fame through a growing presence on blogs and social media, the place retains its special magic.

Indeed, for many, it is exactly what ‘paradise’ would look like.

The place is now a little developed but nothing on the scale you might expect from something so breathtaking, and there are no konbini, vendors, Hato Bus tours, or public toilets (unless they are very well hidden).

We cannot recommend Nikobuchi enough. No photograph can do it justice! 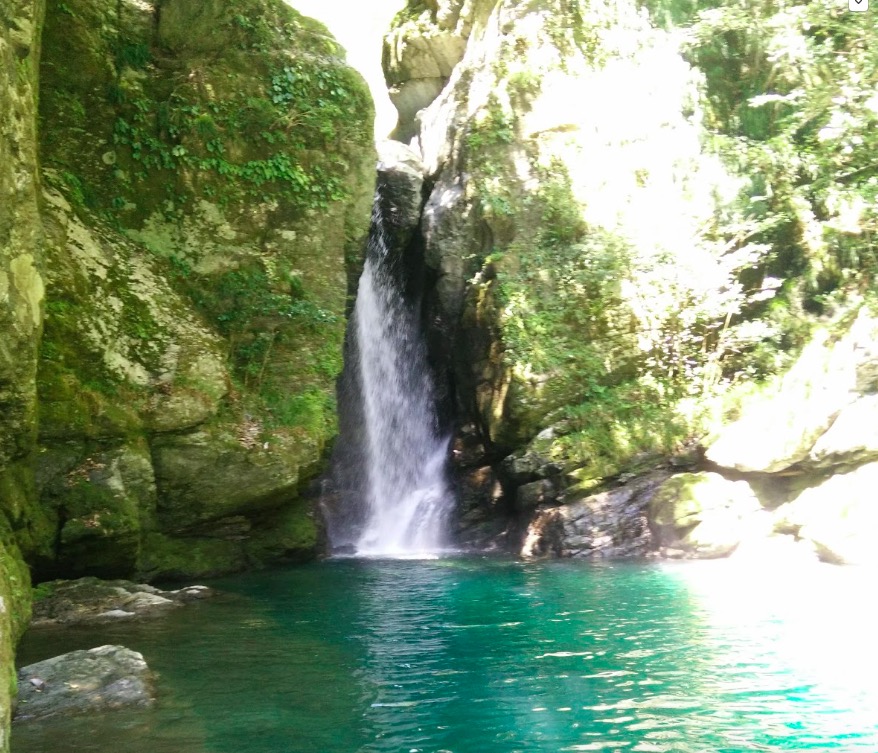 The main event for swimming is of course the pool that the impressively tall waterfall splashes down into. It is nice and deep (you’ll struggle to touch the bottom in places), has beautiful, pretty big (!) fish to share your swim with, and what’s more, fantastic visibility for snorkelling. You’ll get some great jumps off of the rocks, too.     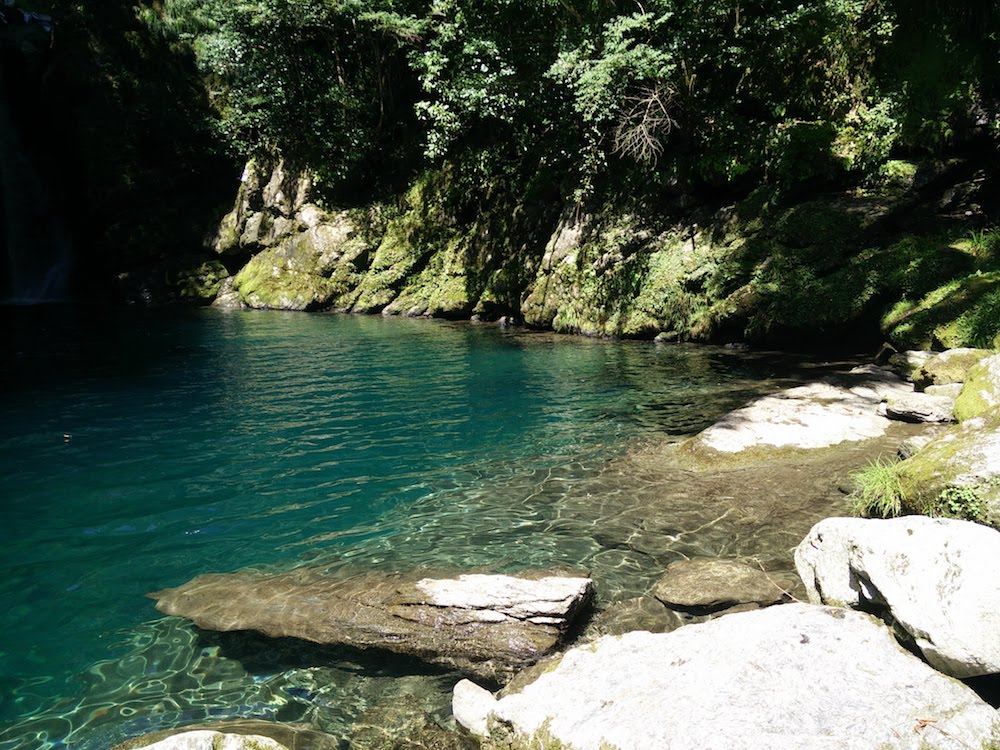 It looks at its best on sunny days when the water seems to radiate with an even more unnaturally emerald-turquoise colour than usual, and rays of sunlight feed through the leaves! Bliss!

Nikofuchi is in the Ino City (いの町) region of Kochi Prefecture (高知県). It’s northwest of Kochi City, and about 37km north of Ino Station, in the valley of a small tributary which eventually feeds into the large Niyodo River (仁淀川), which is Shikoku’s third longest (behind the Yoshino and Shimanto) and deservedly famous for its unreal and uniquely blue colour.

In fact, Shimanto River (四万十川) in the southwest of the very same prefecture was more famously known as ‘Japan’s Most Beautiful River’ in the past, and is also a magnificent blue colour. The tides they are a changing though: as more people find out about Niyodo this title is very hotly disputed and increasingly turning in the latter’s favour.

How to get to Nikobuchi Waterfall?

To drive is the most straightforward route as there is no train station at the waterfall and it is a little far out. If you do drive, it’s just over an hour from Kochi Station, following the 194 road. You’ll find the small single lane road that winds up to Nikobuchi just after Shikokudenryoku Bunsui Daiichi Power Station (四国電力 分水第一発電所) .

Actually the road is pretty straight. From the power station it’s only about 500 metres and you can park along the side of the road (no charge). You’ll pass the waterfall’s gate on your left and just park where you want.

Here’s the entrance to the little road. 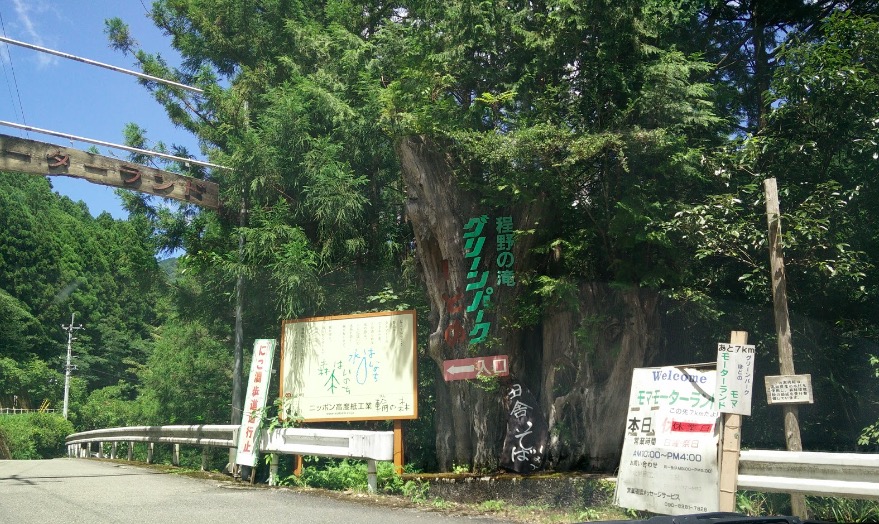 There is a small stairway heading down to the waterfall so simply follow it for about 20 metres down (there are bits of rope to hold as it’s steep so watch out!)   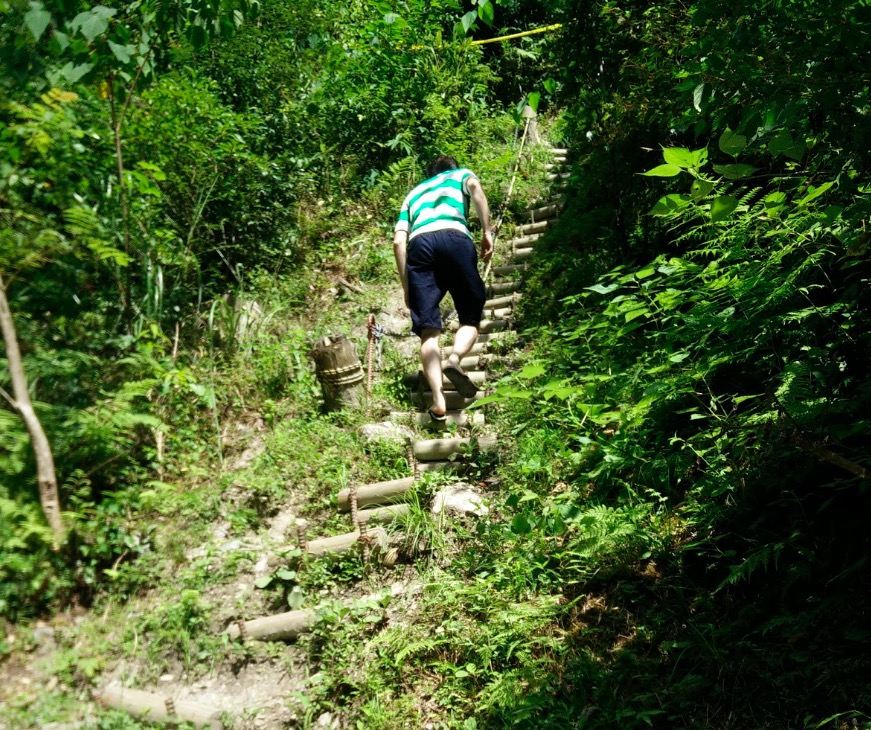 Another way to get there is to get a taxi from Ino Station (伊野駅). It’s about 45 minutes drive from there, we don’t know how much it would cost, however with a few people it would be under 1000 JPY each and you could get the taxi to take you back too. The quickest cheap way is to take the Dosan Line (各停 from Kochi Station to Ino Station seems to be 26 minutes (260 JPY). Take the route heading towards Susaki.

There’s a nice deli opposite the station with good takeout lunch options. The salad boxes and local Shonan craft beers they sell are recommended. There’s a Family Mart konbini about 5 mins walk from the beach if you need something urgently.

The waterfall area has been semi-commercialised, with a gate, a fence and a couple of attendants on patrol. This does mean that it may appear to be closed, sometimes. This could prove massively disappointing if you’ve gone all that way, but don’t worry you can still cool down. If you follow the road up about 100 metres there is a track that goes down upriver a bit. There’s a nice pool there, actually which is also pretty and green, though has a concrete wall to the side.  

You can gorge walk down from there and find your own little pools. Very fun and sincerely recommended , though you should be prepared, with decent footwear. It can be slippery.  

One thing to watch out for here, and in fact it seems to be a problem in much of Shikoku, is the presence of some pretty aggressive flies. We’re not experts on identifying wildlife, but they are large, brown, and have an irritating bite. At times you may find yourself jumping back in the water just to get away from them. Perhaps there is a way to ward them off with a spray or a repellent but we are yet to find one that works. Any suggestions welcome?  

As with ANYWHERE in Shikoku, you cannot spend a day here without eating some udon, and you are in luck (so long as you have a car or don’t mind walking for quite a long way). There is a charming little udon shop if you continue up the hill, for what signposts promise is 12 minutes.   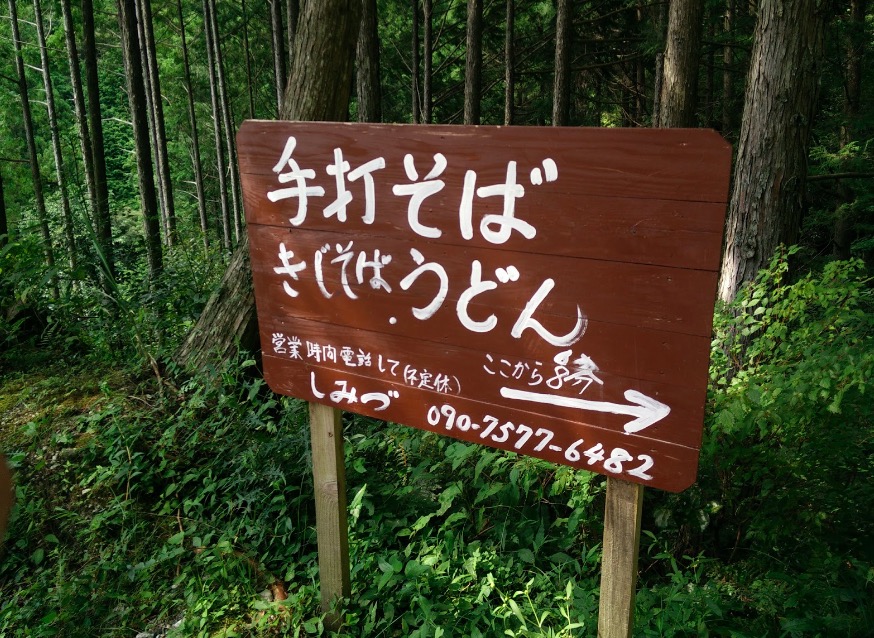 It may actually be a little longer than that. They do a teishoku set which will give you basically everything you need to eat in a day for under 1000 JPY. It’s impossible to miss it if you drive north from Nikofuchi.     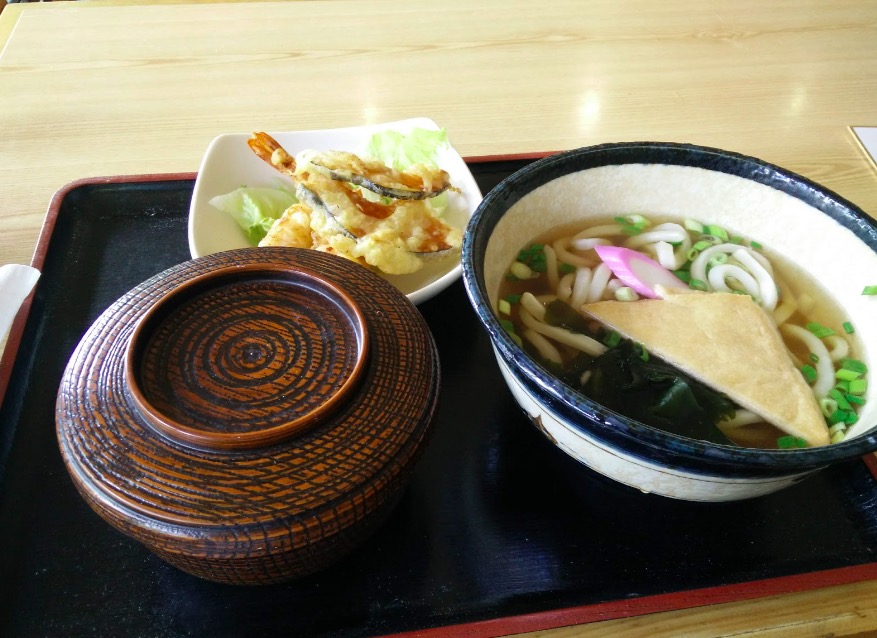 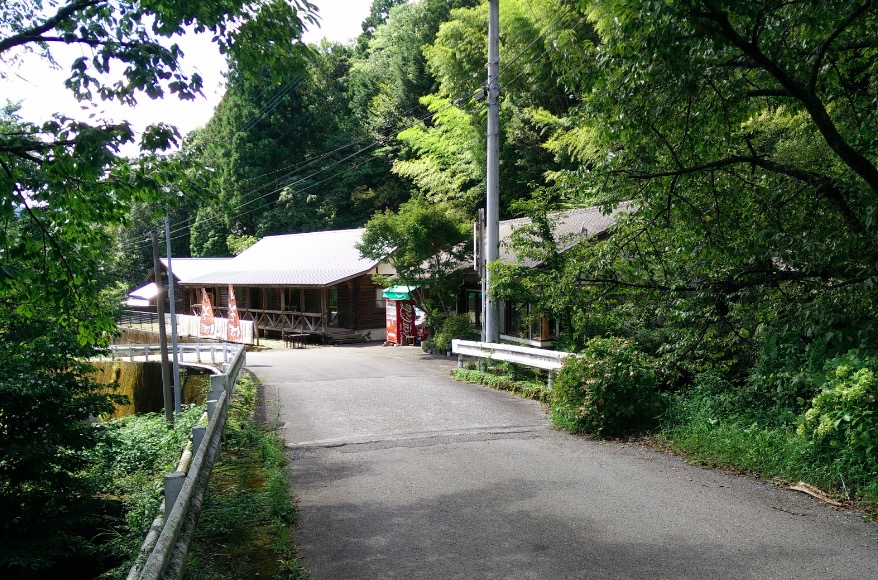 Camping is to be found at Hirose Camping ground (広瀬キャンプ場), about 13km downriver. It’s FREE and has a toilet and a top notch riverside location with a pebble beach. There is nothing bad about it. There is even a convenience store called MOMA 500 metres walk from it. Campsite details here.
nikofuchi

How would you rate Nikobuchi Waterfall as a swimming spot? 3 (1 votes)