What is this place called Hayama?
Where is Hayama?
How do I get to Hayama?
Useful bits

What is this place called Hayama? 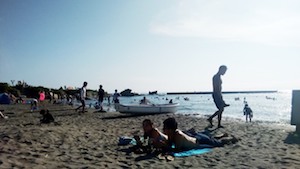 A slightly more time-consuming journey than some of its neighbours, but Hayama Isshiki beach, aka Isshiki Kaigan (一色海岸) is definitely worth the effort. A beautiful stretch of sand so nice that the Emperor himself has his summer home right on the beach. In the summer there’s a tropical feeling: the police guards pacing the royal beach house walls are not there to stop you drinking beer - or even having barbeques - and seem pretty content to get in the beach vibe.

In the summer (around a week into July) the beach ‘opens’ meaning the standard wooden beach structures we get at the resorts all along this coast appear: bars and places to get simple food. Unlike, for example, the busier Kamakura Yuigahama or Enoshima (which is dramatically visible across the sea) it’s a low-key, quiet affair at Hayama rather than an all-out party. Perhaps we have the royal presence or the extra travel time to thank, but it means getting a space on the sand is possible without too much hoo ha. It also means the sound of nature wins over against human chaos and music. If shade is more your scene, there’s a nice area sheltered by trees, and if you like sitting (or pitching a tent) on green grass there’s even a nice little spot for that.

There’s some really good swimming to be had in the bay directly in front of the Emperor’s house. An artificial bay of flat, calm water, flanked by a large, concrete kind of sea wall/pier and gentle currents

Isshiki Beach is not so far from Tokyo or Yokohama, and it’s easy to get there and back in a day. Isshiki (一色) is a region in Hayama city, in the middle of the Miura peninsula south of Yokohama. Miura is the smaller little bit sticking out in between the much more prominent peninsulae of Chiba to the east and Izu to the west. It’s basically Tokyo Bay but on the right side of it: according to locals, due to certain currents the water is much cleaner than neighbouring Zushi and Kamakura.

How do I get to Hayama? 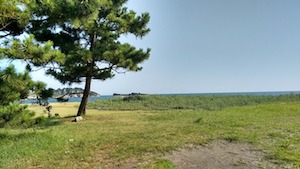 Connect to the JR Yokosuka Line and ride to Zushi Station. From there there’s a bunch of bus stops, ride Bus No. 6 for about 20 minutes.

You need to alight at the Sangaoka or Isshiki Kaigan (use the Museum of Modern Art as a landmark) stops. Tell the driver “Hayama Isshiki”, they’ll help you if you’re stuck as it’s obvious where you’re going.

Then walk through the trees and greenery, about a block walk in the direction of the sea.

Going home watch out for the bus timetables and check your last trip … it’s a long way back to Tokyo.

If you walk into the town there’s a huge supermarket with nice bakery and fresh foods that will save you some yen for beer in the beach cafes.

When there is no lifeguard after 5pm, or anytime out of ‘season’,, jumping off the pier is great fun, but in the peak season this results in a megaphone scolding. 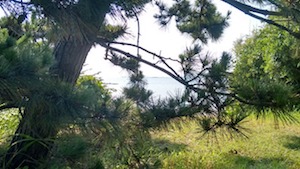 There is another beach, south along the peninsula, just over the grassy knoll (where it’s OK to pitch a tent and shelter under the trees too). The south beach has choppier water, not so much of a nice sandy space, and only a couple of wooden bar structures in summer. It makes up for this by boasting access to a wonderful little sandy beach island with easy access yet few visitors, for getting that truly remote beach paradise feeling.

The island is a short 10-20 minute swim.
hayama

How would you rate Hayama as a swimming spot? 3 (1 votes)