What is this place called Shimoda?
Where is Shimoda?
How do I get to Shimoda?
Useful bits

What is this place called Shimoda?

Shimoda was an unremarkable small fishing port in Edo times, until the US Commodore Perry arrived with his black ships and (well, in short) intimidated the Japanese into opening up to trade.

A hundred and fifty years later the ships are a tourist attraction, there’s a street called Perry Road, and the local economy does well from historical tourism. It seems that all is forgiven and if anything the memory of Mr Perry is celebrated in these parts.

But really, aside from the train station and a few restaurants and onsen, there’s no real reason to stay too long in Shimoda town once you’ve seen the old ships.

The surrounding beaches are what makes this town truly magnificent to us: Perry did well to find some of the most beautiful and varied paradise beaches on Honshu … though it is not recorded if he enjoyed swimming as much as being intimidating.

The most famous beach, and deservedly so - it is stunning - is Shirahama. It’s a legendary strip of gorgeous white sand, looking out towards the Izu 7 Islands, with dramatic cliffs and a James Bond scenic road for access.

At Shirahama the water is remarkably clear and small, rocky cliffs on the south end have some fun jumping and rockpool potential.

Outside of the summer beach season and Golden Week (early May) there is never a problem getting a spot on the sand, but in peak times if crowds aren’t your thing then it might be best to head elsewhere. Summer brings a sort of Nanpa (basically, teenage boys picking up girls … or trying to) festival and it’s not uncommon for people to compare Shirahama rather unfavourably to Tokyo’s slightly seedy night spots like Roppongi.

Such a comparison is undeserved as outside of a few weeks in summer you’ll only have the surfers to really worry about when swimming: there for the excellent swells and high waves that crash into the shore.It’s recommended to spice up your swim and try your own body surfing here, with or without a board.

Another great spot, this time just a little south of Shimoda, is Tatadohama Beach. Very similar to Shirahama, this one has the same white sand, clear waters, good waves, but perhaps slightly more impressive cliffs. With caves and rocks to climb on there’s lots to explore here. You’ll find this to be a slightly less crowded affair, though come high season it’s still going to be busy, and there are a lot of beach resorts and hotels nearby.

Out of season, as with its neighbours, there are always a lot of surfers hanging out. They bring a nice laidback vibe be it in the ocean or picnicking, barbequing and partying beachside.

Moving east from Shimoda town there is a little rocky outpost called Tsumekizaki. Here you’ll find a pleasant park, some cheap and cheerful restaurants, a parking area, lighthouse, and of course, a beach. The rugged beach here has a different feeling to its more sandy neighbours, with lots of rocks and rockpools (great for jumping and lobster spotting), a perfect C shaped bay, and some fine, soft grass to relax on.

The water here is calm and easy swimming, though not on any grand scale, sizewise. If you are in the mood for something a bit less conventional, oozing with nature and more rustic charm this might be your place.

Shimoda is near the southern tip of Izu Peninsula, just a little bit to the east. It has good (by Izu standards) road access and its own train station.

You’ll find Shirahama to the north, about 2 kms away, and Tsumekizaki about 3 km east along some much smaller, winding roads. Tatadohama is a little south along the main stretch of road, maybe 2km.


How do I get to Shimoda?

Though as with the rest of Izu, a car is the easiest by far, it is possible to get to Shimoda by train. Some even manage it in a daytrip from Tokyo in the summer, but for all the cost and effort it seems a little bit inconvenient, and at least one overnight stay is recommended.

From Shimoda, it is conceivably possible to take a cab to Shirahama and Tatadohama beaches at not unreasonable costs (especially if you’ve four people splitting it). You could even walk if you don’t mind the heat (it’s about 4km to Shirahama and 3km to Tatadohama from Izukyu Shimoda Station).

To Tsumekizaki you can take a bus from Shimoda Station Hotel. It’s 430 JPY and takes 20-25 minutes, though infrequent (every 90 minutes or so). The buses are Shimoda Station-Suzaki Kaigan via Tsumekizaki (下田駅～須崎海岸・爪木崎爪木崎行). Again really, you’ve come this far, just take a taxi. Buses and Taxis will end up in the car park area overlooking the bay.

What better way get away from everything than to camp on the beach and listen to the ocean while stargazing. At Tsumekizaki between February and May it is not forbidden, in spite of what the signposts might tell you. In fact you may even get away with a small campfire during these months too, but don’t get too silly or they might start clamping down.

The camping is on a nice patch of grass right behind the beach and allows instant access. Parking is up at the top carpark near the restaurants.

There are some great spots for coffee and chillout near Tatadohama beach, with a nice little track going down to the beach, including the (rather amusingly named for any Brits) Cafe Costa (カフェコスタ). Also overlooking Tatadohama is a nice car park spot where you can light a small barbeque and cook a reasonable lunch. 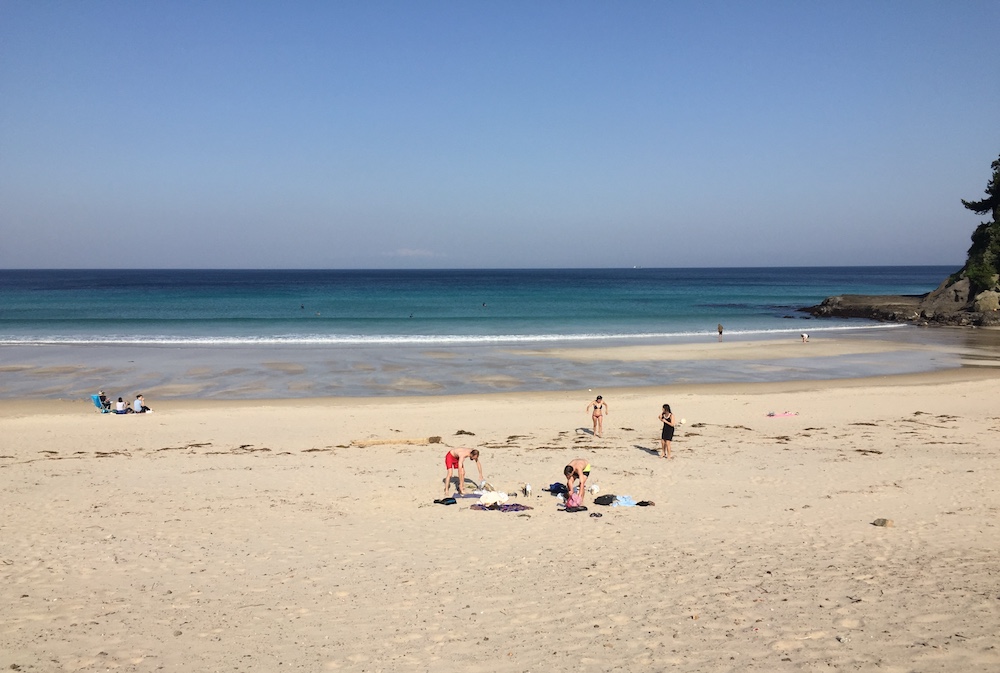 Shirahama is pretty isolated but fear not - there is a great 7/11 right behind (or ‘in front of’ depending on your outlook?) the beach. It sells everything you could want as usual, but with added beach factor: sunglasses, swimwear, goggles, sunhats, shade … and of course ice cream and reasonably priced beer.

With so many onsen around it’s hard to choose just one to recommend, but Shimoda has one extra special bath, for the brave. It’s called Kanayaryokan (千人風呂 金谷旅館). Dating back to Edo times a couple of centuries it’s a huge wooden structure with one deep, long bath and a couple of smaller ones, including an outdoor rotemburo.

The twist is that it’s a rare mixed naked bathing onsen, though there is a separate, non-mixed bath for women. To get there go to Rendaiji staton, the next station north of Shimoda on the Izu Izukyuko line and cross the bridge heading west, it’s only a 200 metre walk from the station so you shouldn’t miss it.
shimoda

How would you rate Shimoda as a swimming spot? 3 (1 votes)